PINA COLADA CUPCAKES RECIPE - A Vacay for your mouth! 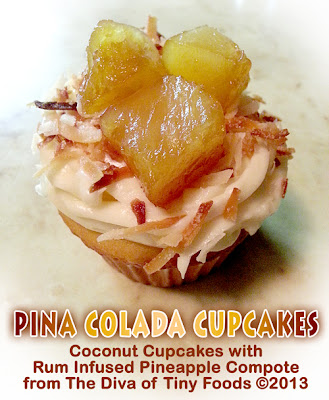 PINEAPPLE COCONUT CUPCAKES
How to do an Edible Pina Colada!

I have been craving pineapple and coconut lately and got it in my head that I might try making some cupcakes with those flavors.  I didn't want to go to a lot of work - as I've said before, I'm basically lazy - and I happened to have a white cake mix on hand, some coconut, some cream cheese and a can of pineapple junks so I thought I could come up with a fair-to-middling little late night tropical dessert.

Feel free to make your cupcakes from scratch from a favorite recipe.

Take one white cake mix and prepare according to the directions.  Fold in 1/2 Cup of shredded coconut that you've run through the food processor for a second or two. Bake as instructed. Allow to cool.


8 Oz. Softened Cream Cheese
1/4 C. Butter at Room Temperature
1 Tsp. Vanilla Extract
2 Tbsp. Cream of Coconut
1 C. Powdered Sugar (+/-)
(you can adjust this to suit your tastes, I don't like really sweet frosting.)
Pineapple Compote
1 C. Pineapple Chunks
1/3 C. Brown Sugar, Packed Firm
1 Tbsp. Butter
1/2 C. Pineapple Juice
(I used the juice from the pineapple chunks)
1/4 C. Dark Rum
Bring all the ingredients, except the rum, to a boil in a saucepan. Reduce the heat to medium and simmer until the liquid is reduced to a thick, syrup consistency.  Add the rum and cook for another few minutes to allow most of the alcohol to burn off.  Cool.
Construction of the
PINA COLADA CUPCAKES
Toast some coconut in the oven. Set aside.
If you want to infuse your cupcakes with a little booze, now is the time.  Take a bamboo skewer and poke about 10 - 12 holes in each cupcake but don't go all the way to the bottom.  Slowly spoon a tablespoon of coconut rum or spiced rum or even plain dark rum over the holes in each cupcake little by little allowing the alcohol to absorb into the cake.

Now pipe your cream cheese frosting onto your cupcakes leaving a little well in the center for the pineapple compote.

Sprinkle on some toasted coconut flakes (or just quickly dip the frosting in the coconut).

Gently spoon on some of the yummy caramelized Pineapple Compote.

Posted by Pop Art Diva Enterprises at 5:00 AM

Do you have a recipe you'd like to share? Do you like my recipes and my recipe cards? Let me know here - The Diva of Tiny Foods wants to know what you think!

Are My Recipe Cards Free to Download? Yes, please do - save them all, print them out and keep them or wrap them with a pretty ribbon and use as a gift! However, please do not use them on your blog, website or for any commercial purpose.

All postings and original art by PopArtDiva.com, copyright 2000-2019. This blog is for entertainment only. All links provided are for the convenience and amusement of the blog visitor only and not to be construed as endorsements of any form. Sharing recipes of my favorite foods and snacks.

My Other Web Spots!